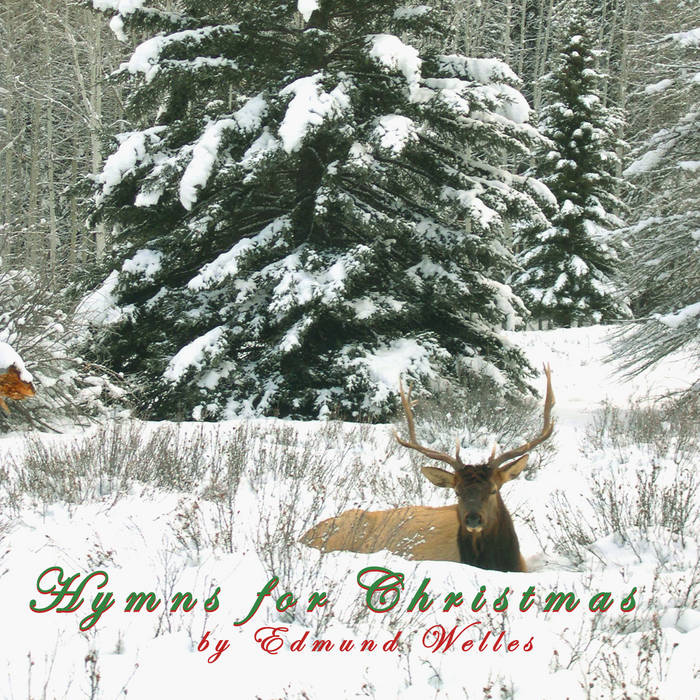 Carsten Pieper Don't expect any reed driven assaults on this one. These songs are just, what the title says: Seasonal hymns, gently played by the versatile bass clarinet quartet. Favorite track: What Child Is This.

A celebratory and reverent offering of 12 classic Christmas songs from one of the world's most innovative chamber music ensembles. Enjoy four bass clarinets performing Christmastide hymns directly from the United Methodist Church Hymnal...

This winter of 2012 the four bass clarinets (the instruments themselves) have spoken loud and clear: LET US PLAY HYMNS. Although currently a Druidic Zen Buddhist and Taoist Wizard in training, Cornelius (leader and composer/arranger) has many fond winter memories of playing in the Yardley United Methodist Church handbell choir for the Christmas Eve midnight service under the attentive direction of Mr. Carpenter. Attempting to sight-read the bass voice from the Hymnal was a pleasant challenge, and he is gladdened now at how easily these exquisite four-part arrangements issue forth from the bass clarinet ensemble.

When Edmund Welles was founded, the mission was to perform all types of music that might be uniquely and artistically represented by four bass clarinet voices. The bass clarinet's range is over 4 1/2 octaves and is centered at the same pitches as the male singing voice, so many of the earlier arrangements for this instrumentation were of a cappella gospel groups from the 30's and 40's and Renaissance motets (vocal choirs of 3-6 voices). Soon followed other "same voiced" arrangements such as Baroque organ works (Frescobaldi), lyrical piano works (Satie), and boogie woogie piano pieces. Then, after an eventful night at the "crossroads" (in the San Francisco Bay Area), Edmund took up a rock, blues and metal aesthetic that has led to many rock arrangements (Radiohead, the Pixies, Primus, Sepultura, Black Sabbath, Iron Maiden, Spinal Tap, Duran Duran and The Residents) and many pulsing, epic and virtuosic original compositions in what is now called the "heavy chamber music" idiom. Three albums have been released of this original material: Agrippa's 3 Books (2005), Tooth & Claw (2007), and Imagination Lost (2011) all available on iTunes and CD Baby and (soon) on bandcamp.

There is an Absolute that is beyond dualistic thought, and the human mind cannot quite reach there, and yet we are That in our true essence. All forms are but a play and a show: we must enjoy it! In spite of the self-created suffering and needless strain that we blindly engage in, there is this light at the core of each of us and at the core of the Universe. In the dark and cold depths of winter, we seek to stoke this inner flame through Solstice ritual and the retelling of myths and celebrations and, against all odds (and now in the face of consumerist depravity), we often feel this inner light more than at other times of year and we openly share it in generous gratitude for this miraculous, beautiful and ridiculous Earth life. That is the spirit in which these classic hymns are offered this year.

Semiratruth joins the show to discuss their latest release, "loading..".